Starting a homelab isn’t always a planned event… no. Sometimes it’ll creep its way into your life, an extra switch here another computer there. At some point as you sit surrounded by hardware getting dirty looks from the spouse you realize that you have a problem. And the only solution is more homelab!

The Current State of the Lab

A quick rundown of the current hardware and software that I have running. 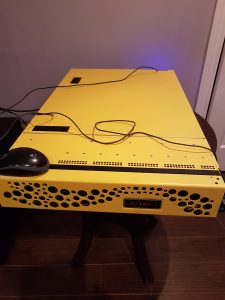 Google T4
Otherwise known as a Dell R720XD. It’s currently running Windows 2016 Datacenter with Hyper-V and the usual slew of VMs to enable pfSense, Active Directory, DNS, and DHCP. It also runs a few desktop environments for testing purposes. The actual process of getting this up and running took significantly more time than I had originally anticipated, but in the end it still became my happy little yellow box happily doing my bidding. In hindsight if someone wanted to go the Dell PowerEdge route in their homelab it would probably be easier to avoid branded versions of the hardware… unless it’s a really good deal! It currently consists of the following: